Phenotypic screening is a type of screening used to identify substances such as small molecules, peptides, or RNAi that alter the phenotype of a cell or an organism in a desired manner. When the molecular mechanism of action is not assumed and does not require knowledge of the molecular target, phenotypic screening can be applied in biological research and drug discovery. Due to the limited success of target-based drug discovery and the increasing need to minimize the risk of late stage attrition due to poor efficacy or off-target activities, phenotypic approaches attract more attention. Many of today's first-in-class drugs with novel mechanisms of action came from phenotypic screening. The biological relevance of the assay systems is deployed and in this respect the commercial availability of unlimited quantities of pure human cell types, particularly those derived from induced pluripotent stem cells, is having a promising impact. Stem cells are fueling the development of many new disease models and with high levels of translation to human biology and disease. These phenotypic assays are increasingly being used in early toxicity testing. Moreover, high content imaging systems have also powered phenotypic drug discovery, facilitating the rapid analysis of increasingly complex multi-parametric measurements of cellular phenotypes or biomarkers.

Compounds are screened in cellular or animal disease models to identify compounds that cause a desirable change in phenotype. Only after the compounds have been discovered to determine the biological targets, this is a process known as target deconvolution. The assay types involve co-cultures of primary cells. The simplest phenotypic screens in vivo employ cell lines and monitor a single parameter such as cellular death or the production of a particular protein. Human primary cells were ranked as the cell type most suited (relevant) for phenotypic screening studies, followed by stem cells or iPS-derived phenotypes and then primary cells of animal origin. Cell line monocultures were the biological systems currently most used to conduct phenotypic drug discovery. This was followed by human primary cells; co-cultures/cell mixtures and then stem cells or iPS-derived cultures. The least used were tissue-like models/xenografts. Phenotypic screening in vivo is best exemplified in whole animal-based approaches. It can also be readily done utilizing the cell painting assay. 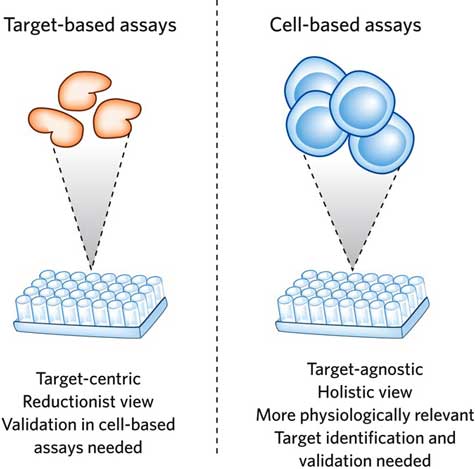 MedAI offers a wide range of assays for phenotypic drug discovery, including a broad portfolio of cell viability and cytotoxicity assays. Only after the compounds have been discovered are efforts made to determine the biological targets of the compounds, this is a process known as target deconvolution. In order to maximize the benefits of phenotypic screening and minimize the chance of missing a hit, it is beneficial to screen against a full compound library rather than library subsets, using high-content screening where changes in the expression of several proteins can be simultaneously monitored.