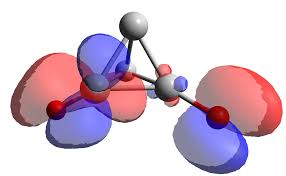 The concept of natural orbit was first proposed by Per-Olov Löwdin in 1955 to describe the unique set of orthogonal 1-electron functions inherent in the N-electron wave function. In quantum chemistry, the natural bond orbital or NBO is the calculated bond orbital with the largest electron density.
Atomic orbital→NAO→NHO→NBO→NLMO→Molecular orbital

Natural (local) orbitals are used in computational chemistry to calculate the distribution of electron density in and between atoms. They have "maximum occupancy characteristics" in the local 1 center and 2 center regions of the molecule. The natural bond orbital (NBO) contains the highest possible electron density percentage, which is ideally close to 2.000, thus providing the most accurate "natural Lewis structure" of ψ. The high percentage of electron density (expressed as %-ρL) is usually greater than 99% in common organic molecules, which corresponds to the precise natural Lewis structure.

What is the Lewis structure?

Using a computer program that can calculate NBO, the best Lewis structure can be found. The best Lewis structure can be defined as the structure with the largest amount of charge (Lewis charge) on the Lewis orbit. The small electron charge in the Lewis orbit indicates that the electron delocalization is strong. In the resonant structure, there may be primary and secondary contributing structures. For example, for amides, NBO calculations indicate that the structure with a carbonyl double bond is the predominant Lewis structure. However, in the NBO calculation, since the bond polarity effect is included in the resonance structure, "covalent ion resonance" is not required. This is similar to other modern valence bond theory methods.