The traditional "one drug-one target" therapeutic approach often shows limited efficacy because of inappropriate targeting, development of adverse events, and potential resistance. Many diseases are not resolved by treatment with one single drug, for example, most cancers and diabetes. At time of diagnosis and staging, many aberrant genes can be observed, either involving mutation or modification or exhibiting altered levels of expression, yielding perturbations to signaling pathways. This is the reality of complex diseases, which complicates their treatment particularly in the difficulty in identifying potential driver or passenger genes.

Drug repositioning refers to alternative drug use discoveries which differ from the original intent of the drug. One challenge in these efforts lies in choosing which indication to prospectively test a drug of interest. Our expert team systematically evaluated a drug treatment-based view of diseases in order to address this challenge. We have developed different methods for identifying candidate indications of existing drugs considering types of interactions between biomolecules based on known drug-disease associations. Suggested novel drug uses were generated using computational approaches. Compared with control drug uses, the suggested novel drug uses were significantly enriched in clinical trials.

Network-based analysis is the most widely applied strategy for drug repositioning. To obtain associations between drug and disease genes, a directed network using protein interaction and gene regulation data obtained from various public databases provide diverse biological pathways. The network includes PPI network, KEGG, gene co-expression network and integrated network, etc. To quantify the association between a target gene and a disease gene, the shortest paths from the target gene to the disease gene can be calculated. Machine learning algorithms, random forest, feed forward neural network and graph neural network, have been used to find candidate drugs for diseases.

With the rapid development of next-generation sequencing (NGS) technology, the explosive growth of high-throughput experimental methods and resulting data and the accumulation of histological data, there have been many databases that can be used to screen single drugs or synergistic drugs. Prediction algorithms are proposed to predict the efficacies of drug combinations. These computational approaches focused on the drug characteristics, fully accounting for disease factors by integrating the data characteristics of disease-related gene expression profiles with drug-treated gene expression profiles. 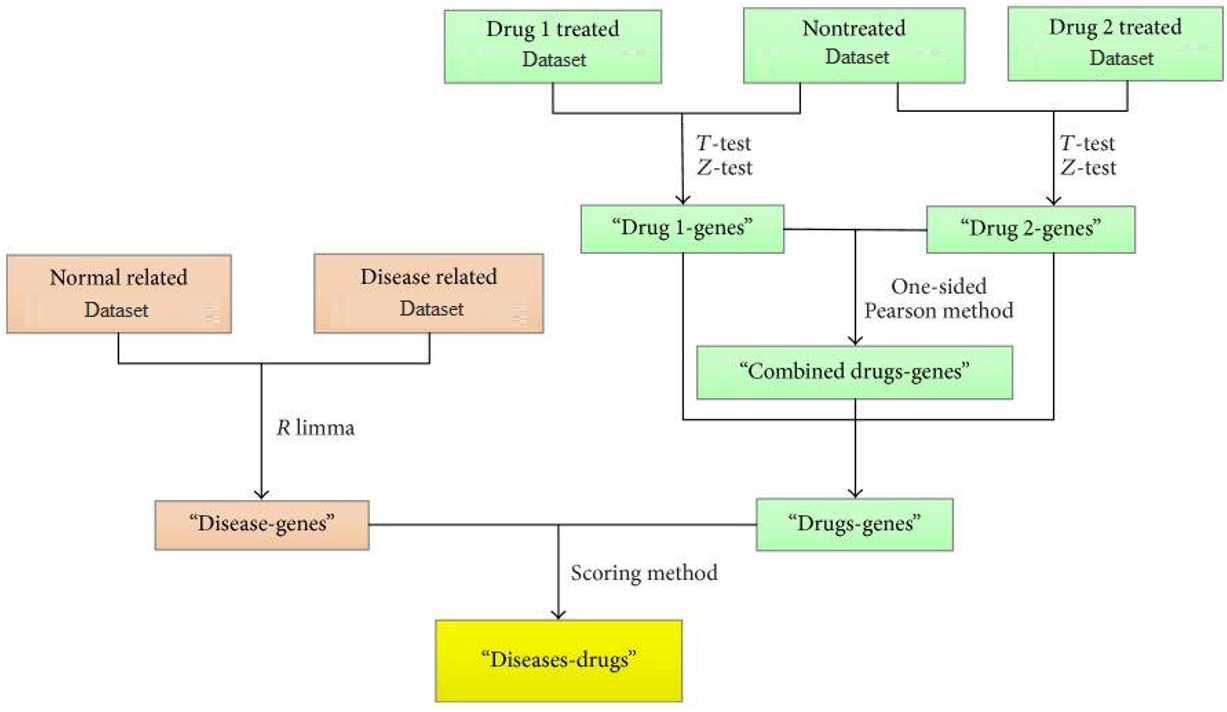 AUC(Area under ROC curve) and AUPR (Area under the precision-recall curve) are popular metrics for evaluating prediction models. Since drug-disease pairs without associations are much more than known drug-disease associations, AUPR is adopted as the primary metric, which takes into recall and precision. Several binary classification metrics are also considered, i.e. sensitivity(SN, also known as recall), specificity (SP), accuracy(ACC) and F-measure (F).

The increasing cost and duration of new drug development make the repositioning of existing drugs using computational methods a significant focus of medical or biological research. MedAI has the full capability set to help you with your In Silico Drug Discovery needs. Our services can be contracted under confidentiality terms as well as other specific conditions agreed with the customer. Please contact us for more details.